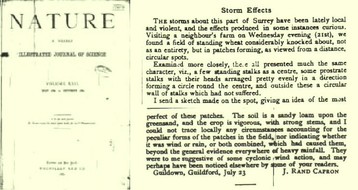 Terence Meaden discovered this account in 2000, and reprinted it in his Journal of Meteorology. The original is from Nature, July 29, 1880 (pictured left). The report is of circles having appeared in a field of standing wheat.

The original event was witnessed on Wednesday 21 July that year, at Guildown, an area of downland on the western edge of Guildford, Surrey. Witness and reporter was John Rand Capron (about whom, see below).

The details are most interesting, and it sounds very much as if the case is of crop circles in the usual sense.

The storms about this part of Surrey have been lately local and violent, and the effects produced in some instances curious. Visiting a neighbour's farm on Wednesday evening (21st), we found a field of standing wheat considerably knocked about, not as an entirety, but in patches forming, as viewed from a distance, circular spots.

Examined more closely, these all presented much the same character, viz., a few standing stalks as a center, some prostrate stalks with their heads arranged pretty evenly in a direction forming a circle round the centre, and outside these a circular wall of stalks which had not suffered.

I sent a sketch made on the spot, giving an idea of the most perfect of these patches. The soil is a sandy loam upon the greensand, and the crop is vigorous, with strong stems, and I could not trace locally any circumstances accounting for the peculiar forms of the patches in the field, nor indicating whether it was wind or rain, or both combined, which had caused them, beyond the general evidence everywhere of heavy rainfall. They were suggestive to me of some cyclonic wind action, and may perhaps have been noticed elsewhere by some of your readers.

Capron's report is sober and detailed. He described the field as containing wheat which had been "knocked about... in patches forming circular spots".

Moreover, his description of the circles themselves (extracted, right) is at once recognisable to us, and there can be little doubt that these circles are of the same kind still being reported today. He also mentions making a sketch of the circles. This has yet to come to light, but if it could be located would add further credence to the account.

John Rand Capron (1829-1888) was reasonably well-known in his day. A solicitor by profession, he was also a noted amateur scientist and photographer.

He had a particular interest in meteorology, although his main area of expertise was astronomical spectroscopy. He was also involved in local politics and was regarded as a philanthropist, said to be willing to help those in poverty and distress.

He is known to have written prolifically, and was published many times in his life. His report to Nature, above, was in the form of a reader's letter.