If crop circles have indeed been around for (at least) generations, it should be possible to find evidence of them in old aerial photographs. I don't believe one can prove beyond possible question that a photographic image contains the real thing, but nevertheless, it tests the idea against falsification. The complete absence of suitable candidate photographs would be a blow to the theory. But what we find is that there are numerous images available from many years ago, which show what could well be old circles in the fields. Particular mention is due to Greg Jefferys, who has recently done some thorough academic research on this issue, of which, more details are given below.

For the benefit of readers not quite so long in the tooth as myself, the issue of old photographs came up repeatedly in 1990/91. At that stage the two main "camps" in circles research were the naturalists (Meaden and his scientifically inclined colleagues) and pretty much everyone else! Meaden's camp held that circles were natural and should therefore have a long history. Others argued that there was an absence of historical proof, indicating the opposite of what Meaden believed. There was in fact some research done into the matter at the time, which is largely forgotten now. The comment below was made by archaeologist Professor Charles Thomas in Cerealogist magazine in 1991, and gives the gist of the issue:

Ralph Noyes was a senior officer in the Centre for Crop Circle Studies (CCCS), and editor of their book, The Crop Circle Enigma. He too adopted this point of view. In a letter to Paul Fuller, also  in 1991, he argued the point forcefully:

Noyes is referencing a study by the Wessex Skeptics, a group set up to challenge what they see as pseudo-science. (His mention of the earlier CCCS study is news to us, though!) The Skeptics had previously examined a limited number of photographs without finding any confirmed crop circles, although by their own admission they stopped short of concluding that the research had decided the matter either way. In any case, the prevailing view was that no circles could be found.

Fast forward to 1995, and Paul Fuller attempted to conduct further research on the matter. He visited the National Monuments Record in Swindon, and studied aerial photos of known circle sites. (His detailed report was published in Crop Watcher issue 24.) He was able to come away with several possible candidates for crop circle images, which he duly referred to "experts" for their opinions. The comeback was largely dismissive and doubtful as to what was being depicted in the photographs, leaving a disappointed Fuller with nothing to show for his efforts.

We have to be careful in evaluating these negative results. For one thing, there seems to be a constant uncertainty over what we are looking for. Are we, as some think, looking for evidence of complex pictograms? Or are we just after plain and simple circles? If the latter, it is difficult to accept that no evidence at all was found, since almost any circular mark in a field might be a crop circle. We also have to be cautious about deferring to authorities on the matter, as Fuller did. For experts in this or that field to dismiss photos on the basis of their personal opinions is fine, but the better authority would have been Fuller himself, who knows crop circles inside out, and was clearly not of the view that his photographs showed nothing at all.

Below is a photograph taken at East Kennett in 1953, previously unpublished and passed to us by a circles researcher in 1999. There are two markings visible in the field on the far side of East Kennett Long Barrow. This is the type of image which demonstrates to us that there is some evidence of circles in aerial photography prior to 1978, and it is images like these which disprove the assertion that none exists. 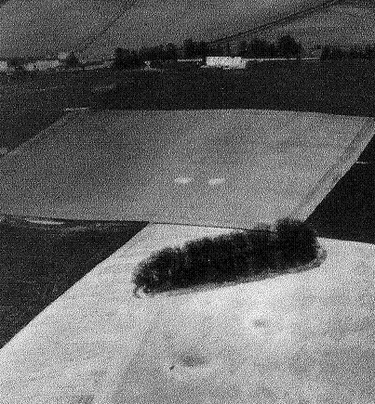 It was not possible to identify these markings back in 1999, but since then further research and aerial photography have emerged, demonstrating that these marks are almost certainly related to something under the soil, possibly in-filled chalk pits. There remains a trace of them in at least one recent aerial photograph.

I do not have copies of Paul Fuller's images obtained from the National Monuments Record in 1995, but for a while there were images from the same source available online. I had a look through, and without too much effort, found a few with vaguely promising details. It was not possible to say for sure whether the markings genuinely depicted crop circles, since the image resolution was so poor.

But the point to be made is that evidence does exist - albeit not conclusive evidence. The earlier failure of both the Wessex Skeptics and Paul Fuller to find definite crop circles, and the (fair) objections raised by archaeologists and by Ralph Noyes, are accountable by the fact that the available imagery was simply insufficient to demonstrate the matter one way or the other. We cannot prove that crop circles existed in those aerial photos, but that isn't what we should be trying to do! What we need to do is test the proposition by disproving it - which is to say, by finding nothing. And we fail to disprove it - to falsify it - when we try. This is how science works. As Albert Einstein famously put it: "Experiment never says 'yes' to a theory. In the most favorable cases it says 'maybe', and in the great majority of cases simply 'no'. If an experiment agrees with a theory it means for the latter 'maybe', and if it does not agree it means 'no'."

Our experiment is to examine old aerial images. Our theory is that old crop circles will be found. Our results, by Einstein's reckoning, can either be a "no", thus refuting the theory, or a "maybe", thus supporting it. Nothing can be positively proven however.

In recent years, Tasmanian researcher, Greg Jefferys, has done some more in-depth work on the matter of old aerial images. Jefferys was able to take advantage of technological resources which were not available in the 1990s, specifically Google Earth's historical overlays which provide a much better standard of photography.

To explain: Google Earth, the aerial imaging software which covers the whole world, has introduced some "overlays", which contain images from earlier periods. There is a so-called 1945 overlay available now, which covers the Wessex area of England. In fact, the black and white images are a composite from the years 1945 through to 1950, although that it not important for our purposes.

Jefferys approached the project with clear objectives to rule out (as best one can) images which seem to be photographic blemishes or imagery of mundane features. His method included testing a candidate feature on the ground for its permanency (was there evidence of it in the same spot in later years?) and also for the details of any shadow visible. Bona-fide crop circles should have a shadow along the edge closest the sun, as it shines across the top of the standing crop, and have no shadow, or possibly even an illuminated region, on the opposite side.

Jefferys discovered a good number of credible images from the 1945 stock, including this one below, of a plain circle. It was seen in a field at Great Bookham in Surrey:
The original photo (left) shows the circle next to a hedgerow. On the right I have zoomed in and adjusted the lighting. We can see several promising details: There appears to be some kind of central feature resembling the standing stems often found in crop circles. There is evidence of some sort of swirl on the floor of the circle. There is a suggestion of standing stems visible around the perimeter of the circle, to the right as we look. And lastly, there appears to be a small "bay" on the opposite edge of the circle, which also shows evidence of a track where someone might have walked in to look at it.

This kind of evidence is excellent. Photographs of this nature are known in more recent times, of features which are definitely crop circles in the usual sense of the word. Is this any different? If it really is a crop circle, it is almost exactly round, has sharp edges, and what appears to be a swirled floor pressed hard to the ground.

Below is another, which has been subject to his analysis. It shows a circle at Shustoke in Warwickshire: 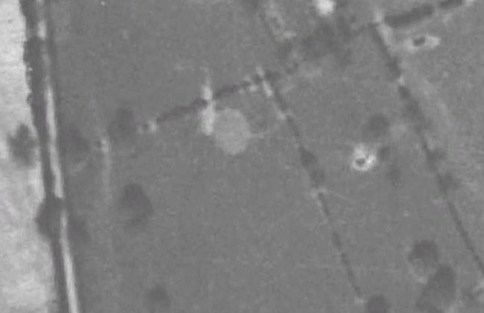 Among the other photographs which Jefferys has identified, are the following two:
Above left is a circle in Halesowen, in the Midlands. Jeffreys esitmates that it is "about ten meters in diameter" and adds from detailed inspection that, "the shadow on its south east perimeter corresponds precisely with the shadows cast by the trees and hedges. The quality of this image is good enough to show there are no tracks through the grain crop leading to or from the crop circle."

The image above right is from Bibury in Gloucestershire. The "circle" seems to have a ring around it, and possibly a complex floor structure.

Jefferys has also found far more elaborate features, which while not proving that pictograms as such existed in the 1940s, do at least lend to the possibility. Below are two more of his images for readers to consider. The features are not permanent, so what to they actually show? Note the essentially quintuplet geometry in the one on the left. The other is a feature on the ground at Chapperton Down in Wiltshire, and shows one distinct circle surrounded - Stonehenge-like - by a ring of light-coloured areas.
Greg Jefferys' work has lately been features in the media. For more about his valuable research, visit his website:

There are many curious traces visible on these old overlays. Certainly there are many contenders for crop circles of some sort, even if the available imagery is inconclusive. In fact, we are very happy to say that we are finding a high number of "maybes", despite the overriding wish to find a definite. Readers should take a look themselves - Google Earth is free, and the images are there to be found.

Below are some of the more interesting ground traces I located myself. It must be stressed that these have not been subjected to analysis by Greg Jefferys and are not part of his research work, and I offer them here just for reader interest. They may or may not be crop circle-related effects. The reason for showing them is to illustrate beyond doubt that those claiming there is "no" evidence of crop circles before the D&D era are simply wrong. Whatever the origins of these markings, they do constitute evidence which is available for evaluation. It is simply not the case that old photographs are devoid of candidate markings.

None of these are visible in later images of the same locations.