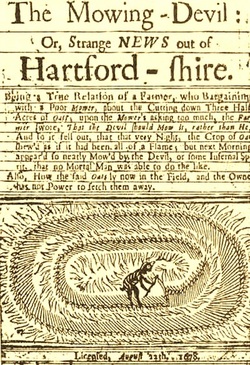 The artifact pictured left is a pamphlet dated August 22, 1678, entitled The Mowing-Devil: Or Strange NEWS out of Hertford-shire. It takes the form of a primitive news report, which started life as a woodcut – a type of early printing plate created by carving into a wooden block and then inking it.

The image depicts a demon, scythe in hand, felling crop stems in what seems like a systematic fashion. The accompanying text reads:


Being a True Relation of a Farmer, who Bargaining with a Poor Mower, about the Cutting down Three Half Acres of Oats; upon the Mower's asking too much, the Farmer swore That the Devil should Mow it rather than He: And so it fell out, that very Night, the Crop of Oats shew'd as if it had been all of a flame; but next Morning appear'd so neatly Mow'd by the Devil, or some Infernal Spirit, that no Mortal Man was able to do the like.

Also, How the said Oats ly now in the Field, and the Owner has not Power to fetch them away. 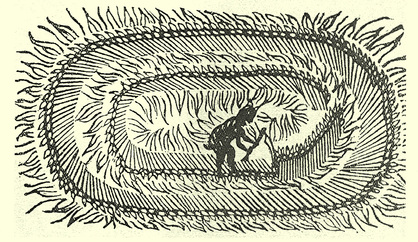 This artifact was rediscovered in 1989 by several crop circle researchers, independently of one another. Some of the details in the accompanying text are worthy of our attention.


The illustration provides further clues, depicting either oval or (allowing for foreshortening) circular rings in which the oat stems are laid neatly parallel to one another, with their heads away from the centre, and apparently inclining towards an anti-clockwise swirl.

This artifact was subsequently reproduced in 1898, in a piece by Lewis Evans called Witchcraft In Hertfordshire, which featured in the book Bygone Hertfordshire edited by William Andrews. (It was later also included in one of a series of pamphlets by the East Herts Archaeological Society, subsequently issued as a book entitled Hertfordshire Folklore by William Blyth Gerish.)

In the Lewis Evans piece, the author presents the original woodcut, and recounts the accompanying story in more modern prose, with his own embellishments. Some of these extrapolations appear to have been deduced from the drawing itself, and it is particularly interesting to see how he interpreted the imagery without the lens of knowledge of the crop circle phenomenon. Evans comments as follows:

The inquisitive farmer no sooner arrived at the place where his oats grew, but to his admiration he found the crop was cut down ready to his hands, and as if the Devil had a mind to shew his dexterity in the art of husbandry, and scorned to mow them after the usual manner, he cut them in round circles, and placed every straw with that exactness that it would have taken up above an age for any man to perform what he did in that one night.

So Evans seems to have taken the image as a depiction of "round circles", with the crop stems "placed" with "exactness" on the ground. This is to all intents and purposes, the description of a classic crop circle formation.

Of course it is impossible to make any conclusive statement about the account, open as it is to interpretation. Objections have been raised to the crop circle reading, on two bases: 1. that there is detail of flames, and that the illustration may depict fire around the central image; and 2. that the oats are described as having been cut rather than flattened.

As regards the first of these objections, it should be pointed out that the account makes no mention of residual burning or fires in the morning. Neither would a burning field result in neat mowing, with the oats now lying in the field with stems parallel. The fact that the image appears to include flames may be associated with whatever caused the impression that the field was aflame that night, but without necessarily a literal interpretation. The account does not sound like the description of a field fire.

As regards issue 2, I personally recall showing a friend a crop circle postcard in 1991, and asking him what he thought of it. Unfamiliar with crop circles, he suggested it was made by people using lawnmowers. The supposition that one might assume crop stems, when seen laying on the ground from afar, as having been cut down rather than pushed flat does not require a great leap of imagination. On this point, the text below is from the so-called "Pink Book", a visitors' guide to crop circles put out more recently by researchers. It shows the same issue is in play: 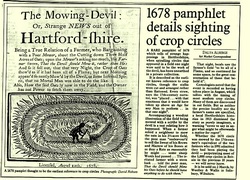 What became of the original wood carving is not known, but there are apparently three original copies of the printed pamphlet in existence. Two are kept in America, the third in the British Library, London. Circles researcher Andy Thomas has seen and handled this original copy.

The pamphlet was reprinted at least twice in the 19th Century, and one of these copies was sold at public auction in March 1994 by Woolley & Wallis, appropriately enough in Salisbury, Wiltshire. Pictured left is a news report announcing the auction. It is not known why these 19th Century reprints were made, but it has been speculated that interest was aroused by contemporary events of a similar nature.