A remarkable photograph has come to light of some 19 circles - or, perhaps more correctly, rings - in a single field beneath Cley Hill near Warminster.

We should say from the outset that we include this case with reservations. There is practically no supporting evidence to go by, and it is therefore not established beyond doubt that these are flattened into grass - however the imagery is compelling.

Here is the original photo: 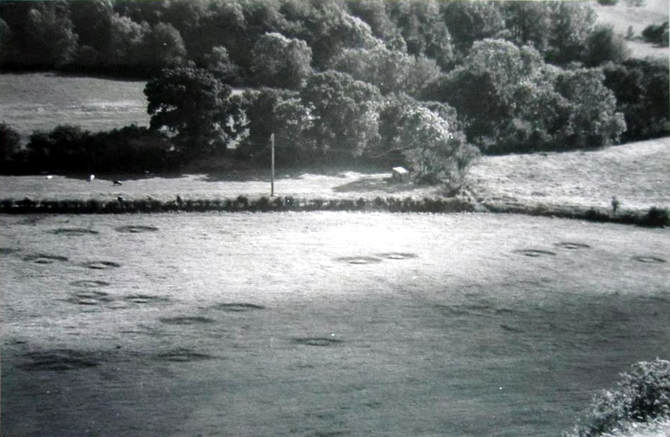 Below left, we have stretched the photo to get a clearer view of the markings. Please note that the stretching process has the unwanted effect of making the impressions in the grass look deeper than they actually are. However this does assist in ascertaining the sharpness and nature of the rings, below right. They appear to be pushed into the grass, rather than consisting of indents in the ground itself. One can make out distinct edges, and see clear standing walls around the insides of the circles.

What caused these, we do not know. Some sort of farming practice is possible, although we don't know what. Given that the circles appear pressed into growing grass, and given that grass has considerable power to recover from flattening, it seems something emphatic happened, and that all of the rings appeared around the same time, not long before the photo was taken.

We can identify the exact field these appeared in. It is on flat ground, on the south side of Cley hill, which lies to the west of Warminster - at the time, a UFO hotbed, and mentioned elsewhere on this site in connection with Arthur Shuttlewood. An account published in 1968, describes,

"grass ... flattened in what invariably seems to be clockwise fashion ... most circles, depressed and clearly formed, measure exactly thirty feet in diameter", which accords with what we see in this otherwise unrelated photo. "Thirty feet" equates to 9.14 metres.

Here is the field nowadays. Here, as in the original photo, we are looking about due south, from the side of Cley Hill itself: 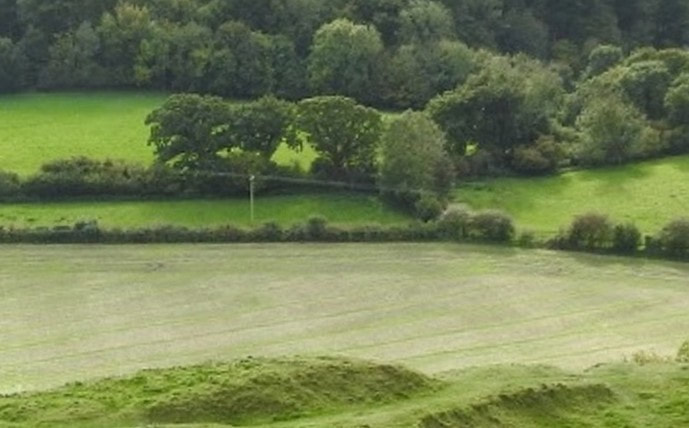 And here, its geographical position:

Modern crop circles are known from this same field. Here's one from 2016, a fraction to the east of the 19 photographed above: