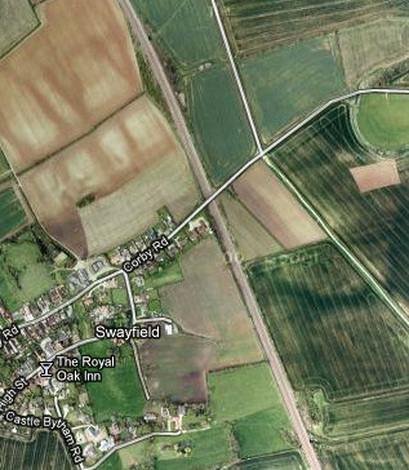 Mr Ingram was photographing trains from the bridge at the approximate centre of this photograph (Corby Road). The village of Swayfield can be seen to the west.

The "A4" in the article is a type of steam engine, and does not refer to the A4 road.

It is unclear which side of the track the circle formed. As the train was headed south ("London-bound"), Mr Ingram's phrase "to the left of the A4" could mean to the left from the train's perspective, or, as he was facing it as it approached, to the left from his. We cannot say for sure.

The whirlwind and crop circle must have been close to the bridge to have been seen, and so would presumably have manifested in one of the fields in this image.