Another tantalising case. Appearing on the crop circle databases of the British UFO Research Association (BUFORA) and the crop circle research group CERES, is the following:


Thus, we have a record of the classic 'five-on-a-dice' configuration having appeared in the 1950s. Alongside it is a record of other single circles in the vicinity, including one in sugarbeet. Heytesbury is a small village south east of Warminster in Wiltshire, and therefore within an area where crop circle reports are particularly numerous.  Further details currently elude us however. 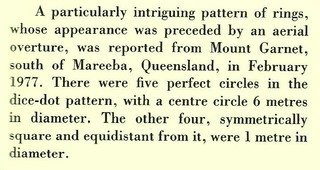 It is popularly thought that the first quintuplet formation was recorded at Cheesefoot Head in Hampshire in 1983. However this is a misconception caused by the photographic selections in the book Circular Evidence.

In fact, besides the case suggested above, Circular Evidence contains references to an earlier one at Headbourne Worthy in 1978 (featured on this website). There also exists evidence of a quintuplet in Mexico in 1977. Yet another, excerpted left, was recorded in Australia, also in 1977 (but thought to be a ground marking of some sort, rather than a crop circle). 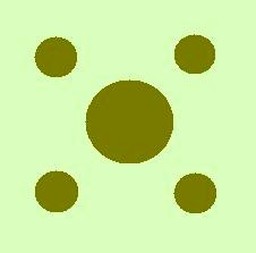