The British press was the most fruitful avenue for discovering old crop circle accounts in the late 1980s, and Terence Meaden printed a public appeal in The Daily Express in 1988, which attracted a letter from Joe Lawrence of Earl Shilton. The letter was followed up by Leicestershire UFO researcher Clive Potter, who wrote to Mr Lawrence for further information.

The circles seen by Mr Lawrence were, from memory, spotted in August in either 1940 or 1941. The circles were first noticed by a farm friend of Mr Lawrence, and brought to the latter's attention. He describes the biggest one as, "a large flattened circle of the crop, estimated at about 10 yards across".

There were also two other circles there as well, both about 6 feet across. Although there is no description of the layout of these three markings in relation to one another, the fact that the two smaller circles were of the same size makes it possible that this was a single event, of the linear triplet variety.

There was a fox's "warren" (ie den) nearby, and Mr Lawrence saw foxes inside the circles and speculated that they may have created them, although such behaviour is unknown. Apparently the farmer who had shown Mr Lawrence the circles was also of that opinion, and had seen similar circles previously.

Below: sketch map by Clive Potter, and a satellite image of the location today. The field in question is now grassland. 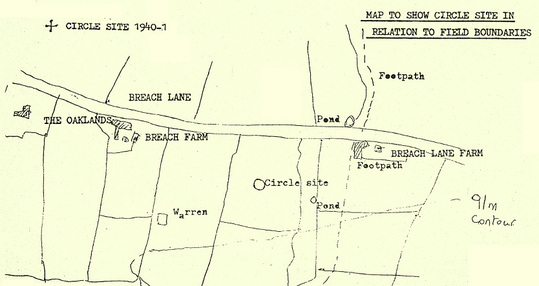 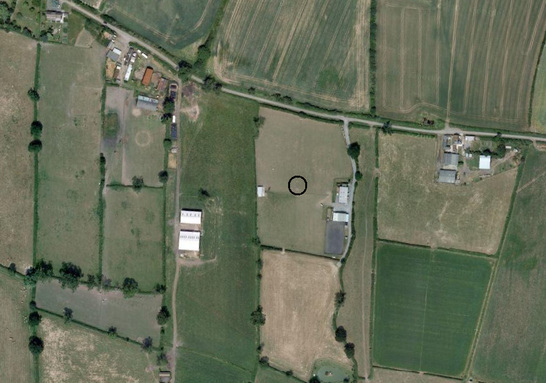