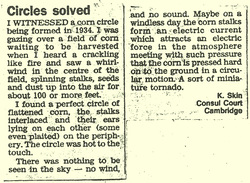 Yet again we have a case which latterly came to light, after the witness wrote to the press in the wake of the widespread media interest of 1990. In this instance, the writer was Kathleen Skin, who sent her account to The Sunday Express, who printed it on August 12, 1990.

Her story is remarkable, not just for the fact that she reports having seen crop circles in 1934, but that she actually saw them form!

The case drew attention from Terence Meaden, who spoke with Mrs Skin by telepone and learned that she had in fact seen two circles form, and not one, as stated in her letter.