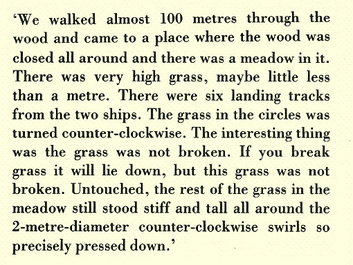 These formations, consisting of triangular triplets of circles in grass, are all on record in connection with the Eduard "Billy" Meier UFO accounts. Meier claimed to be in contact with aliens, and offered a good number of highly detailed photographs purporting to show structured spaceships flying through the sky. We are not going to pass judgment on any of this; we are interested in the several grass circles which were also reported and photographed.

The dates are vague. Meier's accounts begin in 1975, and at least two of the photos below are believed to have been taken in 1976. Others may be a little later. They show geometry of layout and typical flattening, swirling effects on the grass, familiar to students of the crop circle phenomenon. (They all appear to be swirled anti-clockwise.)

Locations are also not precisely known. These circles appeared in the canton of Zurich, a canton being a regional area analogous to the UK "county", or the US "state". (The small town of Hinwil is frequently mentioned as a location, which lies a few miles south east of Zurich itself.)

Alleged hoaxers Doug & Dave have never cited Billy Meier as inspiration for their (later) circles, although they claimed to have made the two triangular triplets in Circular Evidence (pages 107 and 109) in 1988, after reading the book Light Years by Gary Kinder, published the year before. (A quote from Light Years is shown, right.) Nonetheless, they would have us believe that they independently thought up the same phenomenon some years later in another country, creating precisely the same swirl effects.