This description leaves a few gaps, which we need to fill in. Phillips talks of circles, but gives dimensions for "ring width". Some have interpreted this as meaning circles with rings around them; however we think it not detailed enough to imply that, and assume that for "circles" we should read "rings". Thus, we have the following:

That the circle is explicitly described as "entire area depressed" lends weight to our assumption that the other markings were rings.

A scale drawing is given below. This does not represent the layout of the elements, just their respective sizes.

The photograph at the top of this page shows an investigator standing in the centre of one of the two complete rings. Below is another image which has recently surfaced, and which shows the flattening effect more clearly. Note in the close-up how the children's feet are below the level of the surrounding plants, and partially obscured by the grass in the foreground: 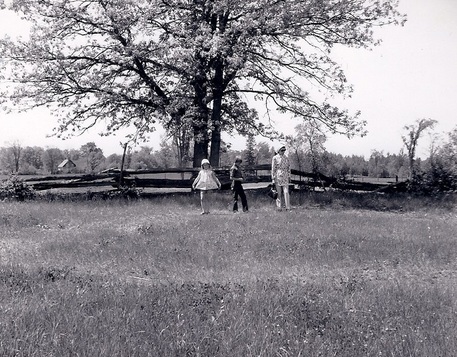 In this image, the background landscape and the tree itself appear different, but close comparison suggests this is a photograph of the same ring, taken from a much lower height.

This event is particularly interesting because none of the four markings are the same. In other cases, typified by the North American events of the 1960s and 1970s, where multiple markings are found they are usually identical. In this instance however, all four are different. We also have the half-ring, which is unknown elsewhere - assuming it was not in fact part of a full ring, abutting a field boundary.

In 2021 we were pleased to hear from a correspondent named May, who also saw these markings in the flesh, and confirmed the distinction between three 'rings' and one 'circle':

I was there standing in the Chapeau crop circles in 1969. They were all rings except for the smallest. It was a full depression.
The three rings had 3 smaller round depressions inside them that were placed to form a triangle, thus the idea that they were from landing gear.

There was a sense of numb stupidity as we kids stood there, perhaps put upon us by our parents who never considered things like radiation...

The guy who owned the farm was a friend of my father, so it was inevitable that we would end up there to stand inside some unknown enigma that could have determined our future fates.

Great to have another direct account on the record, and mention of small depressions inside the circles, which corresponds with reports from other sites in these early years
.