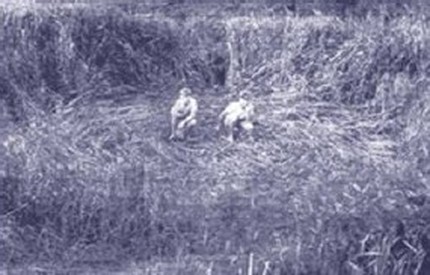 This case follows the famous Tully "nests" by a matter of weeks and is of a broadly similar nature. The location actually forms part of the greater Sydney region, so this circle is unusually close to urban areas.

The circle was found on February 14 by Robert Dennis and Larry Stewart, who walked home from school across some swampy regions of land. It was about 20 feet (6 metres) across, and the boys noticed a "pungent smell" above the flattened plants.

According to reports, the circle was formed in reeds, although they were growing on firm ground, unlike at Tully, where they were growing in water. A write-up by Bill Chalker states, "The tall reeds had been depressed into the mud as if by some tremendous force, and were in a perfect clockwise position."

In a curious coincidence, there is an associated UFO report from a Mrs Maureen Clunne, who lives in a location called - of all things - Punchbowl. It was of course another place named Punchbowl where tricksters Doug and Dave claimed to have started the crop circle phenomenon in Hampshire, England - a dozen years after the photo above was taken, showing two people sitting inside a flattened, swirled circle!